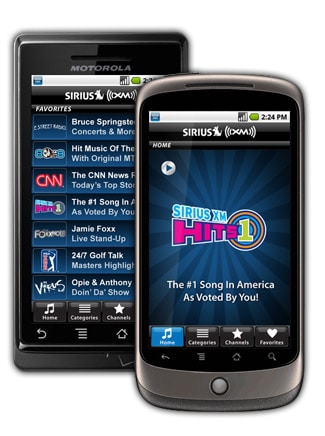 Sirius XM has released their highly anticipated app for the Android platform, and being an owner of A Motorola Droid, I couldn’t wait to download the app and put it through its paces. The app, developed for Sirius XM by QuickPlay Media can be downloaded through Sirius XM’s website with ease, and listeners can be up and running in about 30 seconds after the download.

When the app is first opened, a user simply needs to input their Sirius XM user-name and password, and the tunes begin to flow. Kudos to QuickPlay for not making this step a requirement each time the app is launched. Upon initial launch a warning message appears letting the user know that the app uses a lot of data and that the user is responsible for those data charges. The folks at QuickPlay do give you an option so that you don’t see the message again. For myself, my unlimited plan with Verizon has just become more valuable! I can listen to my hearts content, and have the same bill every month.

The app is very intuitive. Without any instruction I was quickly able to navigate through the four touch sensitive icons at the bottom of the screen. Those buttons are HOME – CATEGORIES – CHANNELS – and FAVORITES.

The HOME button gives users the view of the channel they are listening to. Users can pause the music with the touch of a pause button, and then resume the music by touching the same area which now shows the familiar play arrow in the same location.

The CATEGORIES button is exactly what it seems to be. A breakdown of all of Sirius XM’s content by category. Touching any category will give you all of the channels within the category. The touch sensitive screen allows users to scroll all of the channels by sliding their finger up or down on the screen. The faster you move your finger, the faster you scroll. The CATEGORY Button lets users quickly get to the type of content they want.

The CHANNELS button is again intuitive. It is a scrollable list of channels arranged from lowest to highest. Again, the flick of a finger sets things in motion. I was somewhat surprised that there is no direct channel input, but quickly determined that it was not that big a deal, and would actually add steps to the process of getting to your content. That being said, it would be a decent addition in a future update. One key feature is that as you scroll through the channels you see not only the station logo, but the artist and song as well. This aspect alone is something that has a coolness factor. I actually like the Android app version better than the Sirius XM app on my iPod Touch.

The FAVORITES button is where you can store all of your favorite channels. This is accomplished by pressing on a channel and holding your finger there. This process opens up a pop up menu and gives the user choices. You can get channel detail, which offers a brief description of the channel, Add the channel as a favorite, Get Help, or go into Settings.

– The Sirius XM Android app remembers the last channel you were listening to when the app last ran. This is a good feature because your last channel is up and running when you launch the app.

– The app silences when making or receiving a call, and resumes when the phone is hung up. This is a key feature that users will certainly appreciate.

– The Sirius XM app can run in the background as you use other apps. I listened to music while checking my balance, running a calculator, looked at real estate on Zillow, and even looked at a few Google maps. The app ran seamlessly throughout all of that.

– The app continues running even while texting. If you are like me, you get and receive a lot of texts. The text window pops up, you can answer the text. You can even pull up your contacts, and initiate texts without missing a beat on your favorite channel.

– Good clear sound with minimal buffering. A lot of this will likely have to do with whether or not you are in a 3G area. My experience with the app has been very minimal interruptions. The sound on music as well as the talk channels is very good. On a Motorola Droid, you can clearly hear all content even without headphones.

– Intuitive with simple directions provided. As I said, the app is very intuitive, but should someone be a bit confused, there are easy to follow instructions provided via the Settings menu.

– Simplified volume. Volume is where it should be. The hardware device. Nothing is crazier than having an app with a volume control when the device itself is capable of doing the job.

– The app runs only in vertical format. Not a huge deal, and more often than not a user would use the app in the vertical format anyway, but the option to go horizontal would be a step QuickPlay should consider. I have a MultiMedia dock for my Motorola Droid. The MutiMedia Dock is horizontal. Additionally, my car dock for the droid can go either vertical or horizontal. If the phone is capable of going both ways, the app should take advantage of that. This is also true for the Sirius XM Internet radio app for the iPod Touch.

– No Last Channel Recall. This is a newly added feature to the Sirius XM SkyDock app, and should be among the first things considered for addition to the Android app. I often find myself flipping between two channels, and a one button process for this would be a wonderful addition

– Sports Ticker – Not a deal breaker, but an innovation that the developers may want to add as an option. If a user wants to stream the information they can. If not, they don’t have to.

– Direct Channel Input – This is actually low on my list of priorities given the ease with which users can get to the channels. However, it would be a decent option to consider.

– 5 to 10 seconds to Buffer Channels. I am not sure if there is a way to improve this. When you change the channels it takes between 5 and 10 seconds to buffer the content before you hear the new channel. Not a huge deal, but a faster response would be worth while if it can be accomplished.

– Get the app into the Verizon Marketplace. This is KEY. Right now the app is only accessed by downloading it directly through Sirius XM. The marketplace is where users will discover the app. Slacker is there, Pandora is there. Sirius XM needs to be there as well.

All things considered, this is a very successful app. It does what it needs to do, is intuitive, and is very user friendly. The folks at QuickPlay deserve a pat on the back here. Hopefully they are already working on some cool updates for this app. As a user of both the iPod app and the Droid app, I can honestly say that there are qualities in each that I find very positive. I like the light gray on blue readability of the channels on the Android app better than the black and white on the iPod app.