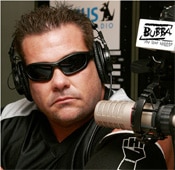 It what can only be described as a soap opera gone wild, Sirius XM Radio and Bubba The Love Sponge may still have a sparkle of life in a new deal that would keep the shock jock on satellite radio. SiriusBuzz learned this morning through an announcement on the Howard Stern Show that the King of All Media intends to discuss the issue with management as soon as possible. Bubba The Love Sponge could be back on Sirius XM with a schedule that would match the current one day per week exclusive broadcast, but the radio shock jock and his staff are free to pursue other ventures as well, including unique programming for Internet Radio start-up RadioIO.

SiriusBuzz reported here on New Years Eve that it appeared that the Bubba and Sirius XM negotiations had reached an impasse and that a frustrated Bubba began telling fans to cancel their subscriptions. Over the weekend I reached out to Brent Hatley from the show at his home to see where the dust was settling, and to let him know that I would like to do a piece on whatever their next ventures were. Hatley indicated that there was a slight chance that the Sirius XM deal may be resurrected, but that he was not really sure. He also indicated that he would be programming a few of his own channels on RadioIO, a project he is excited about.

For right now Bubba is indeed off the air at Sirius XM. His usual programming slot will be filled by Mamory Lane for the time being.

Bubba The Love Sponge has been a staple on Sirius XM’s Howard Stern channels since even before Stern arrived at the satellite radio provider. Over the years he has gone from exclusive to satellite to shared deals with terrestrial radio. At times I have been very critical of Bubba’s on air negotiations, and while there are passionate fans that support his every move, there are many fans who do not like the way Bubba tends to burn bridges. He is a very reactionary person, and sometimes would be better served to take pause before lashing out.

I still stand behind my statements that Bubba, while very talented, is taking things too far. His show sometimes becomes a drama-fest, which can have listeners tuning away from the show rather than tuning in. In fairness I can understand some of Bubba’s frustration, but in all honesty, he is not the only shock jock available to fans and that works against him in negotiations. By contrast deals with personalities like Martha Stewart give exclusivity and cache with a demographic Sirius XM would like to see grow. So while Martha does make a good payday, she is offering something Bubba can’t. He simply is not the number one shock jock, and only the number one scores a big payday. Howard still carries that torch. It is the economics and reality of the situation.

On his terrestrial radio show today Bubba read the article from SiriusBuzz that was critical of him, and even encouraged his fans to do a little Twitter harassment. I understand his frustration with my opinion, but if nothing else Bubba knows I am a fair person, which is why I had reached out to the show over the weekend to get additional details on the RadioIO deal, and spoke to Brent as recently as an hour before this piece published.

The official launch of the Bubba channel on RadiIO will happen on January 10th and will feature a main channel as well as “sub-channels” for Brent, Manson, Ned, and Spice. These sub-channels will feature music, talk, and other programming that the team is excited about. Details of these RadioIO channels will be available Wednesday January 5th. Listeners will be able to stream the Bubba Show each day from 10:30 AM to 12:30 Eastern with the RadioIO service. The show will be available for free until March of 2011. Additional details will be made available during the course of the week.

While a satellite radio deal is still up in the air, it has been confirmed that the door for negotiations remains open and that the team would love to remain a part of the Sirius XM family. I can only hope they will try to keep the level of negotiations on a higher tier and stop with the canceling and slamming of Sirius XM.