Cramer Tells Stern That Merger Delay Is An Injustice 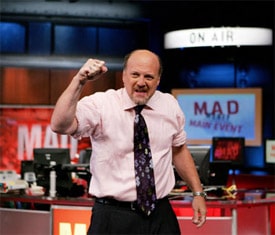 CNB’s Jim Cramer made a rare appearance on the Howard Stern Show today, and he pulled no punches when it came to speaking about the proposed merger of Sirius and XM Satellite Radio. Cramer told Stern that this merger has had more oversight than the Iraq war, that the members of Congress are in the hip pockets of terrestrial radio, that the DOJ has rubber stamped merger after merger, and that the fact that this merger has taken so long is a travesty and an injustice. The CNBC Mad Money host went on to say that he feels the merger will pass by June.

On a side subject, it might be interesting to watch Black N’ Decker today, as Cramer recommended that Artie Lang invest his $78,000 in Super Bowl winnings in the tool making giant.