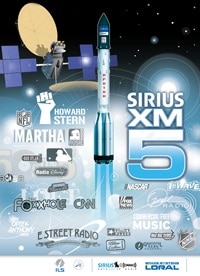 ILS successfully launched Sirius XM Satellite Radios newest satellite, XM-5 today. The satellite launch consists of several phases which include various “burns” before the satellite is adjusted into its final orbit. XM-5 will act as an in-orbit spare to the existing fleet of satellites currently in orbit to deliver satellite radio to Sirius XM’s subscribers across North America.

These days the launch of a satellite may not be sexy, but a successful launch is defiantly something to celebrate, especially for a company that delivers their content to consumers via satellite.

ILS provides regular updates throughout the process with the latest news being posted at the top of the page.

We have confirmed that the Breeze M upper stage has successfully completed its 3rd burn and 4th burn, as well as jettisoning its additional propellant tank. The vehicle is now in a 5-hour coast period, during which we will have nothing to report. The 5th burn is scheduled to start around 11:46 p.m. EDT, or 03:46 GMT. Separation of the XM-5 spacecraft is scheduled to follow the 5th burn completion by about 13 minutes.

As the Breeze M upper stage of our Proton M rocket continues
its climb into space with the XM-5 satellite, we have
received confirmation that the 2nd burn of the upper stage
occurred and shut down as scheduled.

We had a successful liftoff about 10 minutes ago of our Proton M Breeze M rocket, which is carrying the XM-5 satellite. The three stages of the Proton vehicle have performed as planned, and it is up to the Breeze M upper stage to complete the mission. The upper stage has begun its first burn, which is scheduled to last around 4 minutes.

We have liftoff! of the Proton M Breeze M rocket and the XM-5 satellite.