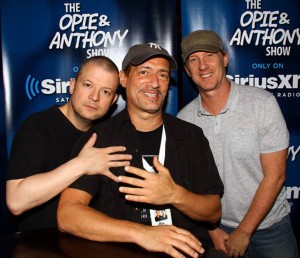 Unless you are an active listener to the Opie & Anthony Show you may not be aware that the duo has signed a new two year contract that will keep them broadcasting to SiriusXM subscribers until the fall of 2014.  I have been waiting a week for a press release, but as yet none has hit the wires.  Even without a release though, the news is official.  The shock jock pair, often compared and contrasted with Howard Stern, have been on satellite radio for a decade, and have been received a growing fan base throughout their career.

In some way Opie & Anthony define one of the critical aspects of satellite radio and what makes it special -- uncensored radio.  While the show may not be for everyone, we can all appreciate that SiriusXM is a platform where true freedom of speech exists.

Opie & Anthony, like Stern, have had their share of issues with SiriusXM, but in the end a deal was reached and satellite radio consumers can rejoice!  Over the past year or so I have seen many passionate Stern Fans embrace Opie & Anthony rather than continue a battle of the shock jocks.  It almost seems as if some people are beginning to think Stern is winding down and are in search of that cutting edge type of radio show that O&A offer.

Details of the deal have not been released, but it would appear that the offer was sweet enough for O&A to ink the dotted line.  The Opie & Anthony channel features Opie & Anthony, Ron and Fez,  The Joe Rogan Experience, Davey Mac Sports Show, Wierd Medicine with Dr. Steve, and more.  Content like this is what separates SiriusXM from other audio entertainment services.   Catch Opie & Anthony in drive time on SiriusXM.