Will Take Rate On Best Of Determine the Future Of Opie And Anthoy? 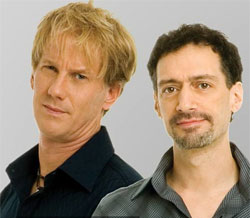 First things first. This is not a bash piece against Opie and Anthony. It is looking at the situation about their contract negotiations in a realistic way. When Sirius and XM were separate companies, Opie and Anthony were the premium “shock jocks” on the XM line-up. Now that the companies have merged, there is potential for Sirius XM radio to see exactly the value of the duo.

Facts are facts, and if all of the channels of Sirius and XM were available for all listeners, the chances of Opie and Anthony remaining on satellite radio would be more narrow. Thankfully for fans of O & A, the merged company will be offering “legacy” service for quite some time, and it is for this reason that I believe that an agreement will be reached to keep Opie and Anthony on board. At least for a while.

In my opinion we will see somewhat of a trial run for O & A. With BEST OF being launched in a couple of weeks, the company will get a chance to see exactly what type of demand Opie and Anthony will have with current Sirius subscribers. In my opinion, the XM crossover will to gain Stern will be substantially stronger than the Sirius crossover to gain Opie and Anthony. Future negotiations will likely take such data into consideration, and could become a determining factor in how long the current deal will last, and if future deals will come to fruition.

Opie and Anthony are no stranger to being in a position of consumers having to pay extra. When they first launched on XM they were an add-on service that came with a fee. Ultimately XM abandoned that business model, raised the base subscription price and made the shock Jock duo part of the overall satellite radio package. When O & A were a premium service, rumors had circulated that the numbers of premium subscribers were not what XM had hoped for. This will be the second time around for O & A to be part of a premium service.

Being from Massachusetts, I am quite familiar with Opie and Anthony, and like their show. I think the duo are talented as well as entertaining, however, they simply do not stack up to Stern in terms of audience size, cache, and ad revenue. How may morning drive shock jocks can the service have, and at what price point.

In a perfect world, the day would shake out to allow fans to access all of the shows from all of the “shock jock” channels without having to choose one over the other. Perhaps Stern in the morning, followed by Opie and Anthony, then Ron & Fez, then Bubba. Somewhere, there may have to be a cut on the team, or someone will get stuck with the 6:00 PM to 10:00 PM slot. One thing we know is that the popularity of the Sirius and XM shock jock talent will include data from BEST OF crossover and listener input.

14 Responses to “Will Take Rate On Best Of Determine the Future Of Opie And Anthoy?”