Why Is Sirius XM Stock Going Down? 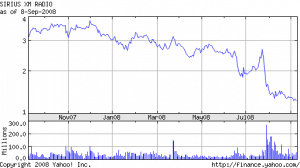 Let me answer this question, before you ask. A lot of people are under the impression that SiriusBuzz is some sort of Sirius XM stock pumping site. Nothing could be further from the truth. In fact, I recently suggested to all our readers that they should put stop losses in at 1.20-1.24 as the stock had broken yet another bottom. To those that listened, congratulations!

To those that did not and want to know what happened today, it can be summed up simply. Mel Karmazin, in my humble opinion, gave the worst speech of his life. Despite a lot of good news coming forth from the conference, Mel made a few statements that would have been better kept to himself.

When asked about financing of the 2009 converts Mel initially was adamant that no dilution would occur. He offered up an exceptional plan that outlined the company’s ability to use cash on hand together with bank loans. Later however, he went a little farther into detail, making the statement that he hopes he does not have to lend the company money out of his own pocket.

Excuse me? Mel just told Wall Street that he believes in Sirius XM so much, that even he does not want to lend the company money! How then can he expect a bank to do the same? A slip of the tongue? An accidental joke gone astray? Absolutely, but the effects were seen in the stock price depreciation today.

The other huge mistake was reporting low-ball estimates so low for 2009, that most analysts will have to lower their forecasts. Mel might as well have said not to bother to buy the stock until 2010, because he was so conservative with the subscriber estimates for the year, that he inadvertently lowered guidance.

Of course Sirius XM will sign more than 2 million subscribers next year, but Wall Street can only go on the data provided by the CEO of the company. Mel in effect stated that the company would see ZERO subscriber growth in 2009. In fact, his estimate for 2009 will be less than the expected total of 2008. All this on the heels of an exceptional presentation outlining increases in OEM penetration rates.

Another mistake? Of course. Any idiot could see that. The problem is there are not that many idiots on Wall Street. When Mark Wienkes and Jim Cramer get a hold of this, there will be hell to pay.

58 Responses to “Why Is Sirius XM Stock Going Down?”