For the second time this year, and for the second consecutive month U.S. auto sales have topped the 1 million mark. For investors in Sirius XM Satellite Radio (NASDAQ:SIRI) that number is music to their ears. Sirius XM relies heavily on the sale of automobiles to garner new subscribers. When auto sales average 1 million per month Sirius XM is able to report what is widely considered decent numbers across the board. As an example, there were slightly over 3 million cars sold in Q1 of 2011 and Sirius XM reported good numbers today for that same period.

April 2011 saw U.S. car sales come in at an estimated 1,156,744 units (I estimated Volvo sales at 6,000 as they have not yet released numbers). This number beats the 1 million mark by a healthy margin, and while a bit lower than March, still is great news for Sirius XM Satellite Radio. Investors always need to look at the blend of sales and in particular what manufacturers the cars sold come from. The company garners promotional subscribers in three distinct ways that we here at SiriusBuzz term as “Leading”, Point-Of-Sale”, and “Trailing”. The “Leading” category (green in the chart) are brands that deliver subscribers at the point of manufacture (when the OEM buys a subscription). The “Point-Of-Sale” category (yellow in the chart) delivers subscribers when a car is sold to the consumer. The “Trailing” category (blue in the chart) delivers subscribers only if the consumer elects to keep the service after the free promotional trial. Understanding these metrics is important in gauging subscriber levels of Sirius XM.

April saw a continued trend of cars in the “Leading” category having the majority of sales on a percentage basis in the month with a 37% share of the market. “Point-Of-Sale” cars such as GM carried a 33.5% share, while the “Trailing” category accounted for a bit over 29%. In a perfect world we would see a balance between these categories, but things will be shifting for several reasons.

The disaster in Japan will carry the largest impact on brands in the “Point-Of-Sale” and “Trailing” categories as these categories are dominated by the auto makers with the most exposure to the disaster in Japan. Sales from the most impacted makers will likely shift to other brands. Ford, GM and Chrysler are natural benefactors, but Hyundai and Kia should not be ignored, as they are gaining market share in chunks. As the year progresses expect the blend to be closer to a perfect 33% for each category, but for a bias to the “Leading” sector. 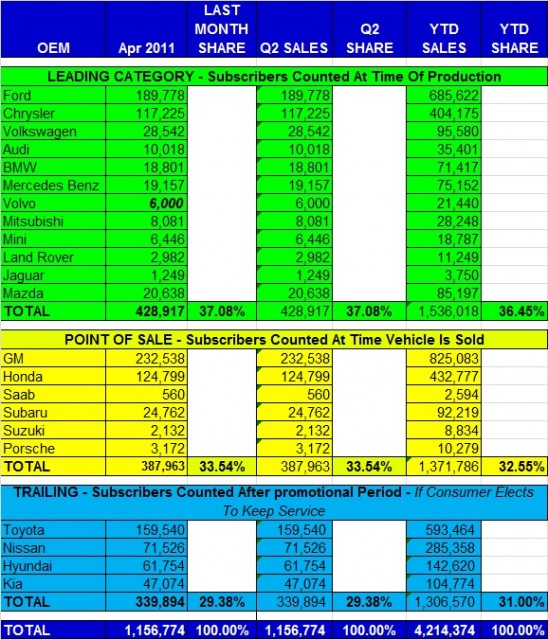 With Auto sales remaining strong Sirius XM is poised, at a minimum, to meet their guidance of 1.4 million added subscribers this year. They reported 374,000 NET additions for Q1 2011, and with Q2 auto sales starting off stronger than Q1, the company should have little trouble besting that Q1 performance on the subscriber front.

One Response to “U.S. Auto Sales Top 1 Million – Music to the Ears of SIRI Investors”