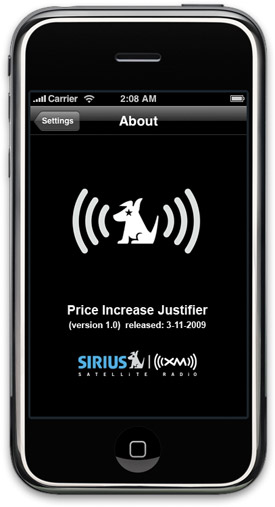 Smartphone sales have hit A key milestone according to Neilsen. The company reported that in the last three months smartphones accounted for 55% of phones sold compared to 34% last year. The brisk sales of smartphones has led to a total penetration of 38% of the marketplace. Simply stated, 4 out of 10 Americans is now sporting a smartphone.

For Sirius XM (NASDAQ:SIRI) the news on the smartphone front is bittersweet. On one hand it means that competitors like Pandora, MOG, Slacker, and iHeartRadio are becoming more accessible for consumers. On the other hand, it is great news because Sirius XM much anticipated Satellite Radio 2.0 promises to use smartphone capabilities and functionality to be the predominant delivery method. The question is when Satellite Radio 2.0 will be available.

Smartphones are the wave of the future. Their very existence has made companies like Pandora and Slacker much more viable. Their integration into the car dashboard gives these competitors access to what is considered the holy grail of radio, automobile listening. It is smartphones and their integration into dashboards that will enable Internet radio to reach a profitable status and for the first time become a possible audio entertainment solution of choice no matter where a consumer is.

While this sounds like doom and gloom for Sirius XM, it is not at all the case. Competition is a good thing, and what will happen is that terrestrial, internet, and satellite radio will all find their main niche in the market. Certainly there will be overlap where the mediums compete, but each will also be able to develop and maintain a core audience that should be substantial enough to keep them viable.

What we will see in the future is these mediums getting into each others type of business in order to keep numbers impressive. Terrestrial, Internet and satellite all currently compete for advertising dollars. Of course at this point the advertising on Sirius XM (non-music channels) and Pandora is less than terrestrial radio, but these players can all learn a bit from each other. Satellite radio boasts 35 million listeners and is able to generate 16.5 million in ad revenue. That equates to about $0.16 per month per listener. Pandora boasts 34 million active users and generated $43.6 million in advertising revenue. That equates to $0.45 per month per listener. Almost three time more. Granted, Pandora advertises on music channels and Sirius XM does not, but the the satellite radio provider does have about 65 channels that carry advertising.

What makes Pandora so much more successful at advertising? One answer is that they capitalize on both audio ads as well as web and mobile ads. Certainly the impressive advertising numbers from Pandora should give both terrestrial and satellite radio food for thought. The smartphone gives Pandora a ton of capabilities that Sirius XM and terrestrial radio may want to delve into in the future.

For their part Sirius XM has a popular website, from an advertising standpoint it would be an attractive platform for web based advertisers. However, at this point Sirius XM does not take advantage of, and leverage their web presence. I realize that the company promises commercial free music, but there are pages on their site that do not relate to music and could house several advertisements. Advertising has never been a key metric for Sirius XM, but now with the inevitable comparisons to Pandora, the company may well need to find a way to boost their advertising. Web and mobile advertising could help them do just that.

For Sirius XM, it is all about Satellite Radio 2.0. What investors should hope for is that Sirius XM's Satellite Radio 2.0 is far more than just consumer benefits. What I would like to see is a product that enhances consumer value while at the same time generating additional revenue fore the company. Price hikes are a distinct possibility, but advertising may be another great solution for Sirius XM.

The dynamic of the smartphone and continued integration into the dashboard will change the dynamics of radio for quite some time. I have previously illustrated how Pandora and satellite radio can easily coexist in the marketplace without actually having to go head to head. Sirius XM has the advantage of being able to develop an Internet platform while Pandora would find it difficult to get into the satellite business unless they were bought out by a company with that capability.

The lesson learned here is that Internet radio is growing on the support of the smartphone in the same way satellite grew on the heels of the auto sector. Things will take time to play out, but the future of radio will be delivered three ways...Terrestrial, Internet, and satellite.