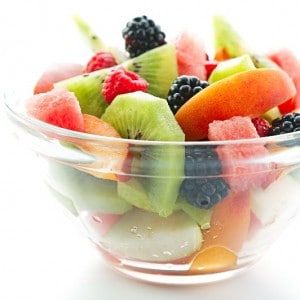 SiriusXM has wasted very little time in firing back on a potential class action lawsuit involving a former intern for the Howard Stern Show.  The suit alleges that SiriusXM failed to pay a non-paid intern and according to the plaintiff, Melissa Tierney was born from an alleged injury suffered when getting Stern his fruit salad.  At this point, with all due respect to the parties involved, I have dubbed the suit as, “The Fruit Salad Suit“.

SirusXM has issued a detailed response that outlines 75 specific responses and 14 specific defenses in this action.  Defenses include:

WHEREFORE, Sirius requests entry of judgment in its favor on the Complaint and prays that this Court:

(a) Dismiss the Complaint with prejudice;

(b) Award its costs and disbursements in this action, including attorneys’ fees; and

(c) Award Sirius such other and further relief as is just and proper. Sirius reserves the right to amend this Answer and Defenses to Plaintiff’s Complaint and add additional defenses as discovery may warrant.

In essence, the attorney for the Plaintiff has his work cut out for him.  The filing by SiriusXM was swift, coming just weeks after the initial suit was filed.  Interns Matthew Goldberg and Justin Vitetta have also joined the suit.  Golberg was an Intern on the Opie & Anthony Show back in 2011.  According to OAPedia.com, a fan website, there did not seem to be a lot of love for Goldberg.  Vitetta was an intern at SiriusXM for nine months, and it appears was then hired by the company for 6 months.  His employment ended in November 2013 according to his LinkedIn profile:

Gaining music programming and audio editing experience through programs such as Adobe Audition, Music Master, Prophet and Dalet systems.
Ample use of Microsoft Office for various record keeping objectives and other administrative tasks.
Present in studio hand for live shows weekly.
Organization of metadata, maintenance of music library, and correspondence with on air talent.  Programming channels such as: Jam On, Pearl Jam Radio, EStreet Radio, Faction, Radio Margaritaville, The Joint, The Pulse, 80’s on 8, Ozzy’s Boneyard, The Spectrum, Hip Hop Nation, SiriusXMU, and specialty shows such as “Tony Hawk’s Demolition Radio” on Faction, and EStreet Radio’s “The Wild and The Innocent” with Jim Rotolo.

All in all, the Fruit Salad Suit seems to be moving along, but there is a lot of work to be done.  Clearly SiriusXM feels that the law is on its side with regard to this suit.  Should the laws governing internships be modified?  There is certainly room for debate.  While this case may certainly be used to try to change the laws down the road, I am not convinced that the plaintiffs in this suit will garner any success on this suit in and of itself.  If their motive is to bring about change, kudos.  If their motive is to collect a payday, then I think they will have a long and winding road to get there.

I do feel sorry for Melissa Tierney in that she had an alleged injury on the job and apparently wanted to recover some medical expenses in some form or fashion.  From what has been stated, this class action suit was somewhat brought upon her.  It now appears that the suit is a money grab.  The notice that all of these Plaintiffs signed was all about unpaid wages: 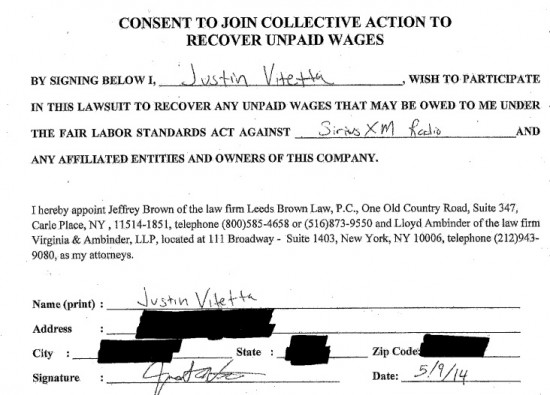 Clearly there will be varied opinion on the broader issue of unpaid internships, their value, and the overall practice.  The lawsuit, I suspect, will be a long and drawn out process that in the end will resolve very little.  Stay Tuned!