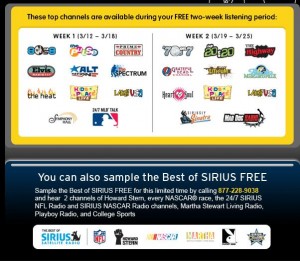 From March 12-26, Sirius XM is offering a free preview of its service on all of its radios nationwide. By my estimation there are at least 15 million deactivated Sirius and XM radios. This is a great opportunity for the company to regain lost subscribers that may have canceled or failed to renew at a time when the company faced an uncertain future. Unfortunately, the company seems to feel that this information is on a “need to know” basis. The company has apparently sent out e-mails to many of its former customers, most of which ended up in SPAM folders as some of our readers have pointed out.

In the conference call held just days ago, the  company blamed a drop off in retail and OEM subscribers partially on the media’s talk of doom.  That is certainly a likely reason which was only accentuated by a poor economic climate. This hypothesis begs the question; What has Sirius XM done to counter the negative perspective that had been created by the NAB controlled media? The answer is: NOT ONE SINGLE THING! In fact, Sirius XM did nothing to promote its exclusive NFL  coverage last fall. Sirius XM literally has billions of dollars worth of talent and yet it does absolutely nothing to promote any of it including Howard Stern, Oprah Winfrey, Martha Stewart, Opie & Anthony, not to mention its sports packages in which I include Chris “Mad Dog” Russo. Like a secret society, only current subscribers are allowed to know that Sirius XM will broadcast the entire NCAA tournament in a matter of days.

There has been talk of Sirius XM attempting to renegotiate its current contract with MLB, which any investor certainly welcomes. As a Sirius Everything subscriber myself, I would probably upgrade my service to gain access to MLB games. That was of course, until last week. Amid absolutely no fanfare, and hidden deep within a conference call that analysts and investors were privy to, Sirius XM quietly announced the availability of the worlds first INTEROPERABLE Radio; The Sirius XM Mirge! That’s right folks, the very same radio that caused a 6 month delay in the merger process and the single most anticipated satellite radio product in the history of the world is now available. The one radio that makes it possible to get ALL the programming that Satellite Radio offers and yet somehow, someway, Sirius XM’s marketing department has failed to put together so much as a small classified ad in a local newspaper to announce this monumental occasion!

If a tree falls in the forest and no one is around to hear it, does it make a sound? The same should be asked of Sirius XM’s marketing department.

59 Responses to “Sirius XM Should Stop Blaming The Media”