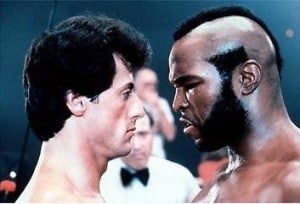 As someone who follows the audio entertainment sector closely I often make it a point to expose myself to services that are competitors of Sirius XM Satellite Radio, as well as keep my finger on the pulse of what other people are doing. It is simply the prudent thing to do. Much to the frustration of many Sirius XM fans and investors I write about these other services and point out the positives that services such as Pandora offer. My opinions are oft met with some criticism from investors who want to know how Spencer Osborne, a loyal satellite radio fan, could possibly go to the “dark side” and how dare I mention that these services are good or even close to Sirius XM.

The recent events in audio entertainment remind me of the movie Rocky III. In the film Rocky is at the top of his game. He is world champion, has endorsement deals, and is the toast of the town. He is about to announce his retirement when Clubber Lange (played by Mr. T) publicly challenges the champ to a match. Rockey accepts and proceeds to get knocked out in the second round losing his championship belt. Rocky was simply too high on himself. That however is not the end of the story. Rocky comes back with the help of Apollo Creed (the man he bested in the first Rocky movie) and reclaims his glory by knocking out Lange. You see, it was Apollo Creed that took Rocky back to his roots of what made him great. It was a hard lesson learned, but in the end it made Rocky even better.

Sirius XM is on top of the world right now. They are installed in about 60% of new cars manufactured, have the best content available anywhere, and generate a ton of revenue. The bad news is that at this years Consumer Electronics show this year Sirius XM was barely present and let Internet Radio as well as HD Radio steal the spotlight, and in effect challenge Sirius XM’s position of superiority. HD Radio pumped out about a dozen press releases and Internet Radio companies such as Pandora were present in a huge way. To top it off Sirius XM shock Jock Bubba The Love Sponge defected to Internet Radio service Radioio. It almost seems like Sirius XM was complacent and without worry as these would be challengers stole the show and landed punch after punch without as much as a peep from the satellite radio provider.

The burning question is whether Sirius XM will step up to slap down these competitive threats in the same way Rocky took back the championship that was rightfully his at the end of Rocky III. Sirius XM has several distinct advantages that should allow it to take back the thunder other took at the consumer electronics show.

While expensive to launch, satellites deliver the content to consumers. There is not clogging of networks, and drop-out are virtually non-existent. These satellite cover the entire northern hemisphere, and a new consumer does not mean a new expense to the network. In fact, the opposite is true. Each new consumer makes the satellite delivery network less expensive. The satellite network, and associated bandwidth are commodities which simply can not be matched by cell networks facing challenges of delivering content with speed as more and more people migrate to smart phones. Satellite Delivery is high quality and consistent. More and more cars are capable of receiving it, and in the end it is this high quality feed that delivers advantages cell carriers can not yet match.

Internet deliver? Sirius XM has that as well. In fact, it is an area where the company can provide vast improvements. While oft overlooked, Sirius XM offers an Internet delivered platform. They can compete head to head with Internet services such as Pandora on the same turf. The question here is whether the company will step up and deliver satellite radio 2.0 with features that outshine the customization offered by most Internet radio companies. The new media player that will be offered by Sirius XM looks very promising, and should deliver Pandora like features. While Sirius XM’s Mel Karmazin downplays the Internet side of the business, it should not be ignored. Instead, it is this aspect that could enable Sirius XM to deliver a knock-out punch. Now that Stern is available on cell apps, and the company was successful in getting Internet streaming of NFL games, they only need to add customization and on demand type functionality to deliver the best content on apps as well.

Sirius XM is a strong brand. The company has demonstrated success, and has proven to the top tier talent that it is with Sirius XM that they will get the best and most exposure. Pandora also enjoys strong branding. They have deals that Sirius XM lack. Should Sirius XM get onto the same turf as Pandora with similar functionality and better content, the battle may indeed be won. Most, if not all, Internet Radio providers will likely shift to a fee based subscription service. At that point it becomes a question of cost vs. consumer value. The bigger brands will be the players to watch.

Sirius XM, with over 20 million subscribers, enjoys a massive cash flow. This allows the company to attract the superior content while at the same time invest in their networks and delivery options. While many Internet radio company are getting by, they are not raising the type of cash needed to get their content offerings to the next level. Sirius XM does not have this problem.

Getting satellite radio, for the most part, consists of buying a car and turning on the radio. Yes, smart phone connectivity is on the upswing, but smart phone adoption is still in its infancy. With apps, there is a requirement to get a smart phone, link it to your car, and then listen. Believe or not, that extra step is enough to take many consumers out of the mix. Consumers want simplicity. At this point Pandora’s most seamless integration into a car is likely in Ford’s SYNC system. For those worried about buffering, it is not an issue in metro ares where the vast majority of consumers reside.

To me the key for Sirius XM rests with updating and upgrading their Internet Radio options in order to level off that segment of audio entertainment. While satellite radio investors will not want to hear this, for music I stream Slacker while at a computer more often than I stream Sirius XM. Simply stated, it gets me the music I am in the mood for in a more effective manner. I would say that nearly half of my audio entertainment desires are filled with iTunes or competing services. Sirius XM needs to get that number to swing to 75% to really reap the growth factor investors are seeking.

Sirius XM got bested at CES. It is now time to deliver what Satellite Radio 2.0 is all about as well as upgrade their streaming services. The pieces to recover from this small setback are there. It is simply a matter of time before the company rolls out their upgraded services.

17 Responses to “Sirius XM, Pandora, And The Rocky Effect”