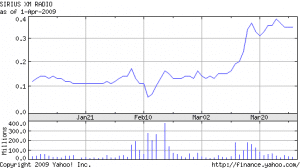 As I’ve stated, I don’t think anyone expected positive subscriber growth to have resulted from an abysmal first quarter. The retail channel is stagnant as distribution switches from Directed Electronics to Audiovox and new car sales were the worst in history. The street is no longer looking at subscriber numbers but instead seems to be focusing its attention on the company’s bottom line. Promotional packages such as the “best of both” and increases to revenue through Internet streaming promise at the least, a decent first quarter for the company.

Yesterday’s “not as bad as thought” auto sales data however, brings with it new possibilities that Sirius XM may have avoided negative subscriber growth. I had been negative on the company’s first quarter, yet yesterdays auto sales results inspired me to take a more bullish look at some numbers.

These are by no means official numbers. The only correct number will be the number that the company reports. Getting these numbers correct is akin to picking the right lottery numbers. Don’t bet on it! The numbers are only meant to demonstrate the potential for positive subscriber growth in the first quarter.