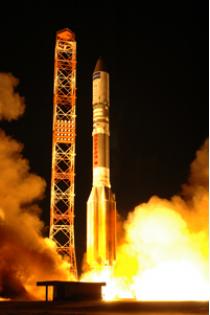 Sirius XM Radio can celebrate a successful launch of their newest satellite (FM-5), but as yet, there are still several steps that need to happen before full control is turned over to the company. With the riskiest part of the launch behind them, the company, as well as investors can breathe a bit easier knowing that they now have one of the most powerful satellites ever built safely in orbit.

The new satellite is not yet in it’s final location, and there will be maneuvers to accomplish the finalized orbit during the first two weeks in July. Once in place, the nine meter reflector deployment will happen, and then the company can begin testing of the functionality. The functionality testing should happen during the final two weeks of July, and it can be anticipated that Sirius XM will take control of the satellite in early August.

The newest satellite will not only improve the signal reception for Sirius receivers, but also carries the capability to do more functions than the satellites in the existing constellation. This satellite will be in geostationary orbit, meaning that it will remain in a fixed position in the sky. The three satellites already in orbit are in a geosynchronous orbit, running a virtual figure eight pattern over North and South America.

Celebration for the fact that the satellite is in orbit is good, but investors should remember that there are a lot of moving parts and tests that need to be completed prior to popping the cork on the champagne.