NAB Gets Aggressive With Record Labels 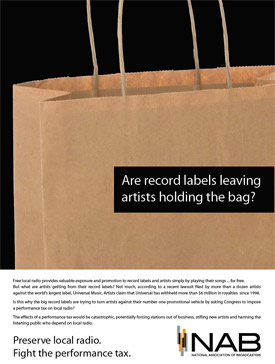 Once again, the advertising is geared to the political establishment that is weighing various proposals regarding music royalties. Currently terrestrial radio does not pay royalties to artists. The theory is that the exposure that the artists receive on radio carries a value. However, in recent years, the emergence of competing audio entertainment platforms has appeared to erode record sales to a point where the marriage between terrestrial and the recording industry is no longer a happy one.

This issue is one that seems to have the recent focus of the NAB, as it would appear that the matter is coming to a head. Terrestrial radio is facing many changes in the landscape, and in simple terms can no longer sit back fat dumb and happy. Things have changed dramatically in only the last five years, and those changes will continue.

Should artists be rewarded for their work? Yes. Does it happen at the record store? Not anymore. Is terrestrial radio to blame? Not entirely. Artists who create compelling albums are having little problem selling them. Such albums have value to a consumer. Consumers will no longer shell out money for an album with only one good song. Instead, they opt to download it.

This issue is sure to get more exciting….stay tuned.

2 Responses to “NAB Gets Aggressive With Record Labels”