U.S. auto sales in March of 2015 were a bit of a mixed bag if you look at the headlines, but growth is still happening, sales are on a pace for 17 million, and SiriusXM remains in a good position to install a large amount of satellite radios into new vehicles. 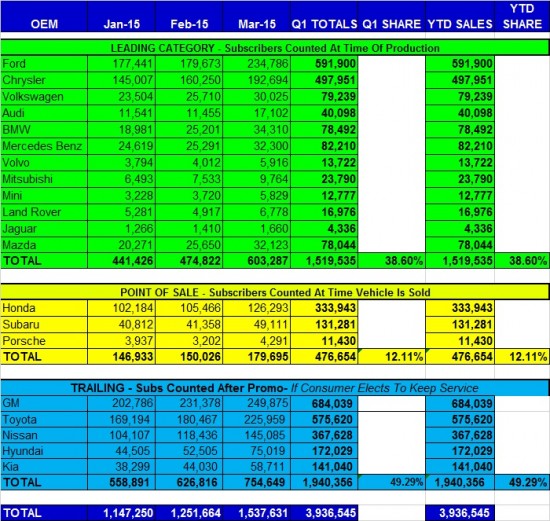 With Q1 sales complete, overall sales stand at 9.93 million.  March of 2015 was easily the largest volume month of the year with sales at 1.537 million, well above the 1.251 million we saw in February.  For the auto sector, year over year comparisons are getting challenging.  The trajectory of growth is not as steep as it once was, but growth is indeed happening.

Nearly half of the cars sold in March were from manufacturers offering trailing subscriptions to satellite radio.  This means that the free trial that comes with the vehicles is not counted in the subscriber number.  These radios will only be counted as subscribers if the consumer elects to keep the service.  Only 12% of the cars sold in March came with subscriptions that were counted at the point of sale, while about 39% were counted at the time of vehicle manufacture.