Jeff Foxworthy and Larry The Cable Guy Team Up With SiriusXM 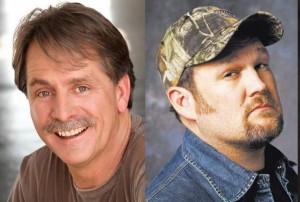 You might be a Red-Neck!!!  SiriusXM announced today that standup comedy superstars Jeff Foxworthy and Larry the Cable Guy will lead their own 24/7 comedy channel on SiriusXM to be called Jeff and Larry's Comedy Roundup.

Jeff Foxworthy and Larry the Cable Guy will not only contribute, but serve as executive producers of  a new channel of exclusive comedy material that listeners will not hear anywhere other than at the comedy stars' live comedy shows.  Comedy channels have been a staple on Sirius XM since its inception.  They oft provide a needed break from news programming and music channels.  Foxworthy and Larry are well known and respected in Comedy and bring a brand of humor that is a great match for the satellite waves.  The new comedy channel will debut later this year.

Jeff Foxworthy is one of the most respected and successful comedians in the country.  He is the largest selling comedy-recording artist in history, a multiple Grammy Award nominee and best-selling author of more than 26 books. He was recently inducted into the Georgia Music Hall of Fame for his accomplishments.  Jeff will once again be hosting the FOX television game show Are You Smarter Than A 5th Grader, set to premiere in 2015.

Larry the Cable Guy is a multiplatinum recording artist, Grammy nominee, Billboard award winner and one of the top comedians in the country.  His television shows, comedy and variety specials have all been ratings successes, and he has appeared in many successful films, including as the voice of the beloved Mater in the Golden Globe Award-winning animated feature film, "Cars."

SiriusXM teaming up with the duo is a natural solution that could well benefit both parties in this equation.  Foxworth and Larry The Cable Guy get to continue to expand their brand and awareness, while SiriusXM gets to capitalize on that same brand and awareness.  The biggest winner may well be satellite radio subscribers that receive unparallelled content that is simply not available elsewhere.