Clarity On Russell Index Reconstitution And How It Relates To SIRI

In response to this good news I have had several people ask many questions about what all of this means, and which indexes within the Russell that Sirius XM will be in. The Global Index that Sirius XM was on the additions list for is pretty cut and dry. What people are trying to determine is whether or not Sirius is in the Russell 1,000 and Russell 2,000. The simple answer is that they can not be in both. The more complex answer is that Russell has not made the 2,000 and 1,000 lists public as yet. To better understand the methodology the following steps are taken by Russell:

So the logical question is which of the 1,000 or 2,000 will Sirius XM qualify for? There is a formula used, and it is possible that companies with smaller market caps stay in the 1,000 while some with lower fall into the 2,000. This is somewhat rare, but for investors that need that type of detail, it is available on page 9 and 10 of this PDF provided by Russell.

Perhaps the best way to try to determine which of the Russell 1,000 or Russell 2,000 Indexes Sirius XM will fall into is to look at last years list and the respective market caps in the chart from Russell below: 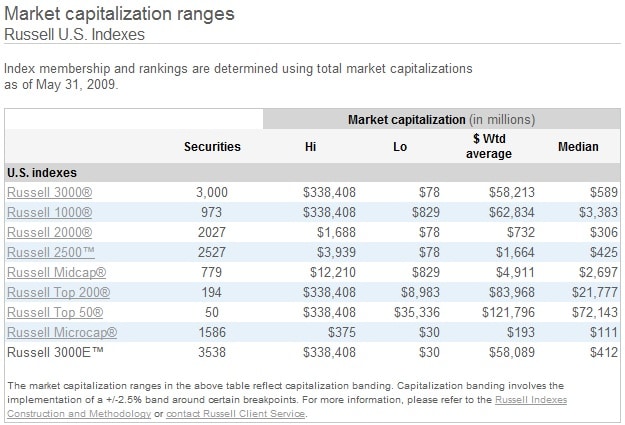 The next thing to consider is the jump in Market Cap that the Russell 3,000 saw this year as compared to last year. The Market Cap is$13.4 trillion in 2010, up from $10.6 trillion at this point last year. This represents just under a 30% increase, which is substantial. Without going through 3,000 companies and figuring out their Market Cap it is difficult to pin Sirius XM into either the Russell 2,000 or the Russell 1,000 with any certainty until the Russell themselves announce the companies included on those Indexes. Investors can certainly speculate, but there has been no definitive news released yet. Simply stated, be happy that they are on the Global and Russell 3,000 and wait for the additional details to be released.