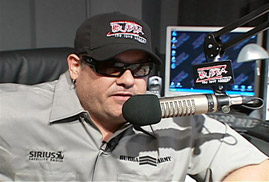 A caller on the Bubba The Love Sponge Show called out Bubba on Valentines Day. Mary, the caller wasted no time in getting to her point:

BUBBA – What can we do for ya honey?

MARY – Why are we listening to NASCAR? Why are we listening to repetitious Ned tell the same old damn stories? Why don’t you get on the ball you fat boy you? Why don’t you put on a good show? Don’t take all of Howard’s guests, get your own and put on a good show for us. You used to be funny. You used to do great things. And now you’re just sitting in a corner stuffing your face.

SPICEBOY – This chick’s all right

MARY – I don’t know why you don’t go marry whats-her-name….Oprah Junior up there…Robin. You got so much in common….you can’t read, you can’t play an instrument, you can’t sing. Why don’t you just get married and go run away.

BUBBA – Mary, wha…what’s…why are you so mad Mary?

MARY – I’m mad because you used to have a very good show, and now your show is nothing but repetition. (this being said as Bubba pumps in NASCAR talk over Mary speaking). Turn on channel 128 you big doufus and you can listen to NASCAR. And if you want to hear the news or politics there’s 20 different stations for that. I want to hear about your funny assed day and how you spend all your money making buildings and buying cars….oh yea we gotta hear about your mother and her new car and her kitty that made her sneeze

MARY – You know what…..That’s because you haven’t been on all day you Fuc*Face

MARY – YEA because she’s driving her cu*tmobile , “yea, I got a new car and it goes 55 miles per gallon”…..Well I was gonna call you up and say….Well Bubba said it goes 52 miles per gallon who’s lying here…..ahhh it’s not that important…Then we gotta hear about the poor cat that has to come home. She can stuff her face with nicotine, but a few cat feathers….oh no, that’s bad news.

BUBBA – I think she called it your little cu*tcar….is that what you called it?

MARY – I called her a little cu*tmobile

NED – WOW. Janie could call in and we could have the battle of the “c’s”

MARY – Damn straight I am

MARY – I’m older than her and I’m bigger than her…and I’ll knock her on her “I think I have a rich little ass” ass.

The segment continues. Mary slams everyone on the show except Spiceboy. Janie gets on the show, and the fireworks start. The expletives begin to fly, and the show staff laughs all through it.

The sad part is that this segment has been the best segment on show in weeks.

The Bubba The Love Sponge Show has gone downhill ever since he began his negotiations with Sirius. Ultimately Bubba resigned with Sirius, but also signed a deal with Cox Communications to do a morning show. When that happened, I felt it was a mistake for Bubba. I felt that the cast of the Bubba show would get worn down, and that by the time they got to Sirius’ afternnon show the show would lose a freshness.

Listeners became frustrated with the Bubba rants against Sirius corporate, whether the deal would get done, and the constant complaining. Now, Sirius listeners are treated to a show that has less preparation, more repetition, and is not the caliber that once existed. The magic of the show got tarnished, and listeners began to fade away.

With this site I get the opportunity to speak to many people. Over the past two months I have heard time and time again that people who used to listen to and enjoy the Bubba The Love Sponge Show are now tuning out. This was a sad but predictable situation, and the deterioration has taken less time than many might have imagined.

A drive time show takes hours of preparation. If Bubba and the crew are doing a morning show, then the afternoon show suffers. What was fresh and exciting on their morning gig with terrestrial radio seems to lose it’s flair in the afternoon. The delivery is not new and not fresh.

I was critical of Sirius for not locking up Bubba as an exclusive, and for allowing the terrestrial deal to happen. I can’t blame Bubba for chasing the dollars, but I can blame him for biting off more than he can chew.

At one point Bubba seemed to be lined up as the “heir-apparent” for the morning drive slot if Stern ever decided to retire. Over the last 3 months, Bubba’s stock has come down several notches. He needs to see this. He needs to take corrective action and decide whether he wants a home on satellite or terrestrial or “podcast-willie”. The way things are currently going, Bubba may well be in danger of satisfying no one.

Now before the Bubba Army slams me, let me say this. Bubba’s hard core fans will tolerate much more than casual fans. However, to get new fans, the show needs to be good all of the time. Repetition, jokes that relate to the morning show that most don’t hear, and any chatter about taking on corporate get old and tired real fast. To remain relevant a show needs to attract new listeners. To attract listeners, each and every show needs to be top notch. I am sorry to say it, but Bubba is not delivering the quality of show that he once was.

I had heard about the Mary call through a reader. I did not hear it myself until I emailed a friend who was an avid Bubba listener to see if he had the audio. His response confirmed my thinking. He said, “I can get you the show, but I did not hear it because I do not listen anymore”. I was stunned. This is someone who used to e-mail me about happenings on the show. This is someone who has bought Bubba and Ned merchandise. This was an avid fan. Now he no longer listens.

For Bubba and the crew, I hope you guys take what Mary was pointing out and what I have written here to heart, and consider what is happening. You have had a great show. Bring it back to that level. I realize that your dual deal is time consuming, but find a way to get that magic back.