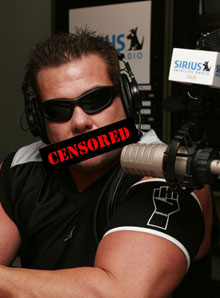 In breaking news it appears that Sirius XM radio personality Bubba The Love Sponge has severed ties with Sirius XM Radio and will no longer be broadcast on the subscription service, which aired his show on Howard 101, a Howard Stern branded channel. It appears that Bubba is announcing to the world over Twitter that there is no deal with Sirius XM. Adding fuel to the fire, Bubba is encouraging people to cancel the service.

Realistically speaking, the move is likely a very poor move for Bubba. He also has a terrestrial radio show, but his brand and style on radio are not very compatible with FCC regulations. Bubba has also been pumping an Internet Radio site called RadioIo, a public company. His agent has a substantial stake in the upstart Internet Radio company, and has stated many times that he may make a move to the RadioIo service.

The issue here is whether Bubba is really as big to subscribers as he is in his own mind. The real answer is that while he is wildly popular with some, he is not in the top tier of radio personalities, and at this point could be easily replaced on the Howard channels. Jay Thomas and Jason Ellis could be possibilities when it comes to filling out the Stern channel line-up.

Bubba The Love Sponge has ranted and complained for years now. The constant negative attitude was a detriment to the show, and many subscribers simply tuned out. He does have passionate fans that will support him and even buy and pump RadioIo stock, but when you consider the reduced size of his fan base, his latest move is destined for failure. Neither RadioIo nor Bubba The Love Sponge have enough cache to guarantee success.

The most foolish part of this whole mess is that once again Bubba is burning bridges. He claimed a loyalty to Howard Stern for giving him a second chance. He repays that kindness by telling subscribers who listen to Stern channels to cancel their service. Bubba simply is far too reactionary for his own good. He will rant and rave, but will people actually listen? The answer is no.