With SiriusXM already announcing subscribers, the auto news may not carry the same importance as it otherwise would.  However, tracking this data carries great value in assessing where we were, and where we hope to be.  The auto sector had sales of 15.55 million in 2013.  This was higher than initial expectations, slightly lower than mid year expectations, and in line with late year expectations.

One thing to note is that as 2013 closed out, the use of incentives was heavier.  Essentially, the tail end of the year was fueled by discounting more-so than big demand.  This is important as we step into 2013.  Remember, sub guidance for the year is now 1.25 million and that is based on sales of about 16.4 to 16.5 million this year.  If sales are closer to 16 million, then the sub number is harder to reach.

Unlike most of this year, this past months sales were flat when compared to 2012.  In other months we were seeing 5% and 10% gains.  The subtle news here is that sales are flattening out a bit.  We should, as investors in SiriusXM, pay close attention to the fact that the slowing growth in the auto sector will translate to SiriusXM. 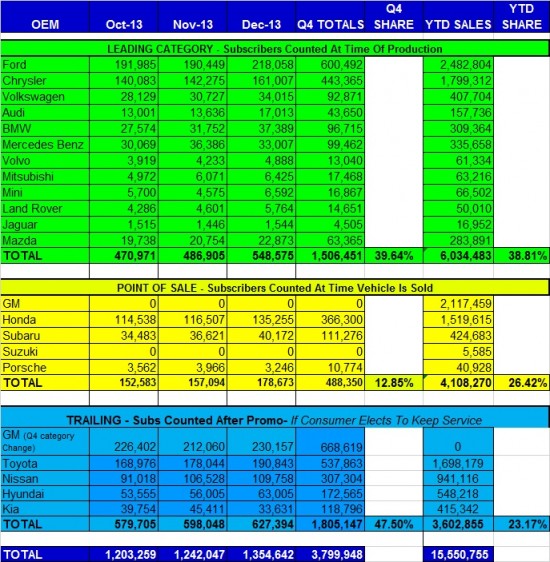 What we need to be aware of going into 2014 is that the point of sale is now making up only about 10% of the sales of autos.  Simply stated, we need to re-think how we look at the timing of auto sales and what quarters they impact SiriusXM.

100% of the satellite equipped cars in the green category will be counted as a sub from the time it is produced, for the time it sits on a dealer lot and then for the length of the promotional period.

100% of the satellite radio equipped cars in the yellow category will be counted as a sub for at least the trial period.

0% of the blue cars will be counted as a sub during the trial period, and likely about 45% of those will become subs and then be counted.